Mountaineering at the End of the World - The New Lecture

Living the vertikal Way
A Lecture by Robert Jasper

In his lectures Robert talks about his mountaineering career from his first climbing steps in his native Schlüchttal in the southern Black Forest. He tells about his love and passion for ice climbing and mixed climbing. He takes his viewers on his adventures in the very large north faces of the Alps. Of particular note are his solo tours of the largest north faces of the Alps: the Eiger, Matterhorn and Grandes Jorasses and their first free ascents.

The first main theme of the approximately two-hour lecture focuses on the famous Eiger North Face with its moving mountain climbing history. He explains the background and the historical stories of the route Erstbegeher and the railway construction on the Jungfraujoch in 1896. The experiences and impressions of nature that Robert makes in this wall are very close to his heart next to his exceptional mountaineering achievements he has made here.

The highlight and the second part of the lecture traces his past Patagonia expeditions into the Chilean interior ice, the largest ice surface outside the poles. Robert managed to score the spectacular first ascent of the 1000-meter-high north face of Cerro Murallon. The route "Gone with the Wind" was nominated for the "Oscar of mountaineering”, the "Piolet d'Or".

Robert tells his stories live.
Duration of lecture: approx. 110 minutes (with break)
Bookings can be arranged

Robert Jasper is a regular lecturer at national and international film days, festivals and events. He also gives his own presentations about his stories. He has held talks at the Alpine Days of the DAV Cologne, the Alpine highlights of the DAV Munich, the Mountain Sightseeing Festival in Dresden, the Alpine Film Days in Going or the Alpine Days in Lodz.

Lecture: TIERRA DEL FUEGO- MOUNTAINEERING AT THE END OF THE WORLD
From the Eiger North Face to Monte Sarmiento on Tierra del Fuego.

Robert Jasper, one of the world's leading extreme mountaineers and ice climbers will be showing his latest multi-vision show and will comment live. The first main topics of the lecture revolve around the world-famous Eiger North Face. Stories that move Robert Jasper and that he knows well like no other. (17 x Eiger north face, 4x first ascents etc.). Beginning with the dramatic climb of the Erstbegeher of 1938 (Heckmair), with its moving mountaineering history until today. The first free ascent of the Japanese Diretissima, (1800 meters X-degrees) in the summer of 2009 where Robert Jasper and his rope partner Roger Schaeli wrote climbing history wrote and were nominated for the Unterkircher Award.

Jasper tries to bring the viewer closer to the impressions of nature and mountain moods with the backgrounds he gives, the historical stories and the experiences and motivations in the wall today,.

The absolute highlight and the main part of the lecture revolves around the past Tierra del Fuego expedition 2010 to the "end of the world". Adventures are usually created by extraordinary ideas. Jasper and his team sailed in gale-force storms in the footsteps of Magellan, the famous navigator of the 15th century, after whom the daring embarkation (Magellan Strait) between Cape Horn and the Fireland mainland is named after. Together with his climbing partner Jörn Heller, mountain photographer Ralf Gantzhorn, and skipper Micki Fischer with his 16-meter-long Tari II sailboat, Robert Jasper set off for the mighty ice pyramid of Monte Sarmiento. Even Charles Darwin was astonished by its power and called him the most impressive mountain of Tierra del Fuego.

Jasper reports rough seas, strong headwinds and ocean currents that were hard to deal with. "House-high waves from the Atlantic Ocean showed us a hint of what's going on in a storm here". After 11 days of seafaring and 260 nautical miles (about 500 kilometers) Jasper and his team reached the Bahia Escandallo, a small bay in heavy rain, where the boat anchored. Three attempts, all undertaken in bad weather, failed. They set off from their sailboat for their fourth ascent attempt in dubious conditions. Through cold rainforest and moors it was difficult to find the beginning of the glacier. Storm and white out and them caught in a snow cave. Stagnant snow and the cold made it difficult to manage. After a long and complicated climb Jasper, Heller and Gantzhorn finally reached the summit of Monte Sarmiento. In memory of the great explorer they named the route "The Odyssey Magellans”. After another week at sea and the crossing of the dreaded Strait of Magellan Jasper and his expedition team safely and happily reached the port of Punta Arenas in Chile.

Duration of lecture: approx. 90 minutes (possible in two parts upon request)
Bookings can be arranged

Lecture references: the Alpine Days of the DAV Cologne, the Alpine highlights of the DAV Munich, the Mountain Sightseeing Festival in Dresden, the Alpine Film Days in Going, the Alpintage in Lodz or the Kendal Film Festival, etc. 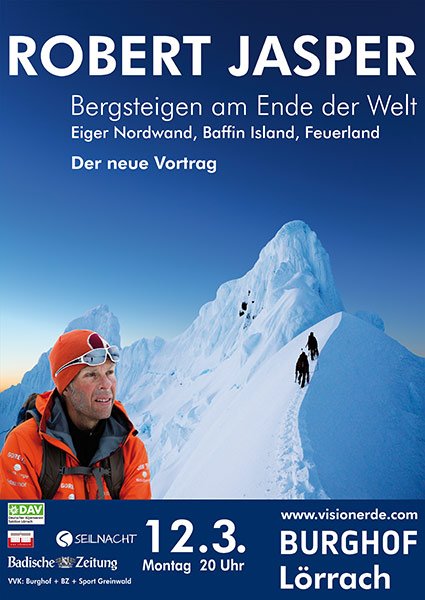